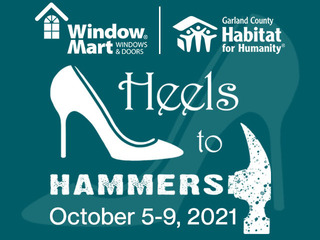 Presented by Window Mart, the seventh annual Garland County Habitat for Humanity Heels to Hammers 2021 Build will take place *October 5-9, 2021. Over the course of five days, 200 women will come together to build two houses, side by side, for two deserving families in our community!
From swinging a hammer…to landscaping a yard…to painting a room, this event encourages women of all skill levels to participate in building a Habitat for Humanity home. In addition to helping two deserving families receive homes, this week gives women a sense of comradery and team-building opportunities. (Yes, men are welcome too!)
Each participant will receive:
Lunch provided daily:

COVID-19 Safety:
GCHFH will follow all recommendations and guidelines available at the time of the event regarding COVID-19 safety measures. GCHFH always works to keep our volunteers, families, and staff safe!

*In the unlikely event that Heels to Hammers is canceled or postponed, GCHFH appreciates your contribution to safe and affordable housing to deserving families in Garland County. 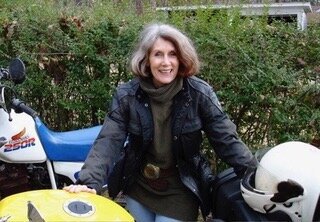 "Two weeks after we moved to Hot Springs from Sarasota Fl Ann says "I'm tired of unpacking boxes and in the newspaper is an ad for a new chapter of Habitat for Humanity looking for volunteers to help build houses. Let's go!"

We walked into a cloud of gypsum dust (they were cutting sheetrock with a circular saw) and volunteers scurrying about in no discernible pattern. We slinked off into an unoccupied bedroom and finished the walls by ourselves in a couple of hours.

That was it for us. A certain tall man drafted us into the organization.

Although Ann had worked with me in the building business, her real skills were with people and organization. In the beginning, GCHFH had trouble with community awareness and money. So Ann proposed a Designer Showcase Home benefit.

She convinced a skeptical neighbor to lend us their historic home, she rounded up local and Little Rock designers to claim one room and decorate it as they would a showroom, promoted the event in local venues, got restaurants to donate snacks and drinks and successfully pulled off a unique event. She did it again and again in different houses every year for 6 years.

When the Arts Advisory board wanted to do a children's art event called Art Blast, again, Ann stepped up for GCHFH. This time she spent half a year rounding up large appliance boxes and got paint stores to donate paint and rosin paper. When the time came she had volunteers cover the convention center floor with the paper, cut windows and doors in the boxes and painted streets and driveways and called it Habitat Village. She gave the kids brushes and paints and let them paint a house. It was the most successful booth at Art Blast all 4 or 5 years it was held.

In later years Ann worked behind the scenes until she could no longer contribute but always lauded the work of GCHFH and never once allowed anyone to give her credit for her help in starting one of the most successful chapters of HFH."

Thursday, October 7 is dedicated as Ann Caruso Build Day in honor of Ann who passed away May 14, 2020.